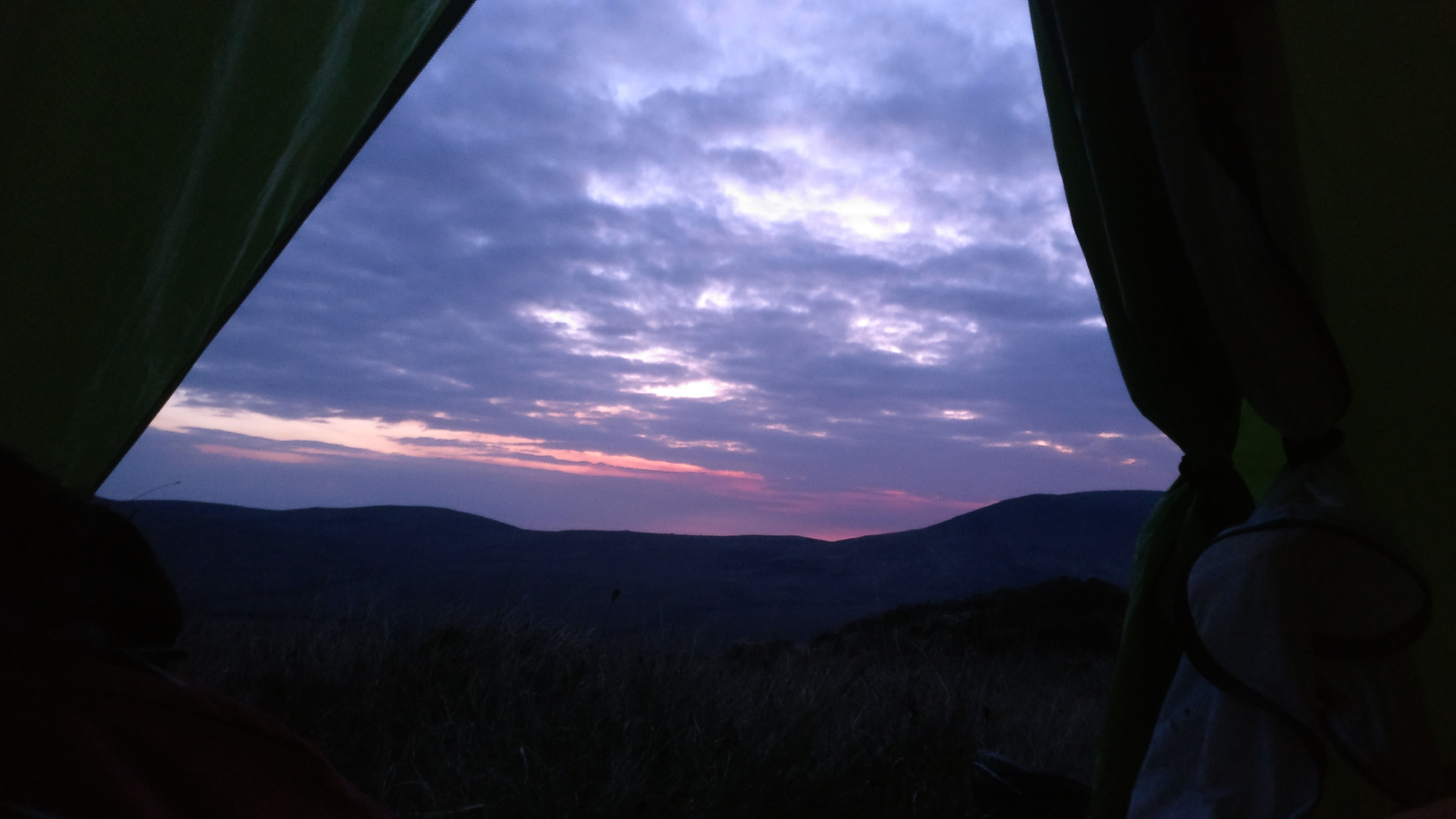 Three days hiking and camping in the Wild Nephin Range in Mayo.

The romantic notion of spending days sauntering through Ireland’s last wilderness was inspired in a local bookshop where I stumbled across a copy of “The Way that I Went” by the Irish Naturalist, Robert Lloyd Praeger, who described the area as the loneliest place in the country.

After reading Praeger’s book, published in 1937, I was curious to discover if it was really possible to find an area of true wilderness in our little country. I was curious to learn if one could get some measure of the experiences of the great epic explorers in far away places right here on our own doorstep.

The Nephin Beg wilderness, sited on the western seaboard in northwest Mayo, is the remotest and most desolate place in Ireland. If there is a wilderness to be found in Ireland, then this has to be the place to find it.

This area jealously guards itself from outsiders by it’s harsh weather — being one of the wettest parts of the country — and, when it warms up, being protected by a battalion of Midges.

But occasionally it opens itself up and welcomes the lonely adventurer into a land of pristine beauty and tranquillity.

In early May, such conditions were in place. A forecast of five days of sunshine, low winds, with little humidity, following a month of fine weather created the conditions for perfect hiking and camping.

From the Mayo town of Newport, I took the evening bus to the north Mayo village of Bangor-Erris.

This little village marks the beginning of the waymarked Bangor trail – an ancient route that was once used to bring livestock from Bangor to the town of Newport through this desolate landscape.

By seven in the evening, I have joined the waymarked Bangor trail which allows me a three hour saunter before sunset. I follow the Bangor trail for two kilometers and then leave it to journey into the wild. After leaving the trail, the softness of the boggy terrain becomes very apparent.

My first summit of the day is Knocklettercuss, at a height of 370 metres.

There is no universally agreed definition on the difference between a hill and a mountain.

There can also be an element of snobbery about what a mountain is by those returning from the higher peaks of the Alps and Himalayas.

Where definitions do exist they are rarely universally agreed on. In the United Kingdom and the Republic of Ireland, a mountain is usually defined as at least 2,000 ft, or, in metric rounding, 600 metres. So according to this definition Knocklettercuss is a hill, rather than a mountain.

Though for me, prominence and steepness are the characteristics that define an interesting elevation whether it be a hill or a mountain.

The weather is exceptionally pleasant for this time of the year. The temperature is a mild 14 °C. A  light easterly wind of around 5 km/h with no humidity is a welcome relief from the heat of the climb. Looking upwards, the sky is a clear blue with the moon beginning to appear on the southern horizon.

Despite the absence of any significant wind there are no midges about as the weather is not humid enough.

The warm air of this evening is reminiscent of an evening in the mountains of Spain.

I linger around the summit being mesmerised by the sheer beauty of the views. This journey into the wilds of this country is an intentionally slow and thoughtful journey to savour and enjoy the experience.

Sunset is now closing in quickly, so I decide to make camp for the night on the shoulder of Maumykelly.

Due to the absence of Midges, the blight of every hiker, I can choose a camping spot close to a small meandering bog river, which will be a very convenient supply of water both for supper tonight and breakfast in the morning.

It feels wonderfully quiet and peaceful here. Not a soul in sight. I haven’t seen another person since disembarking the bus at Bangor. Indeed this place is so wild that it will be another two full days before I hear or see another human being.

I fall into a deep sleep inside my tent under the fading light and to the sound of an ornithological orchestra with a notable cuckoo seeking the most attention.

The Ballycroy National Park was established as a national park in 1998 and is one of the largest expanses of peatland in Europe, consisting of almost 120 square kilometres of Atlantic blanket bog. In 2013, state agencies dedicated 11,000 hectares to the the Wild Nephin Wilderness Area – a rewilding project to increase nature conservation biodiversity.

The next morning I awake amid the dawn chorus of mother nature’s rhythm, along with the light of the rising sun piercing through the walls of my tent.

After breakfast, I continue my trek climbing Slieve Carr which, at a height of 721 metres, is my first mountain of the day.

From here the view of the national park is truly stunning.

A recurring feature of my skyline are views of the Slievemore and Croaghaun mountains on Achill Island. The distant mountains are engulfed in a the hazy mist with vistas that are truly enchanting and almost mystical.

My progress is impeded as the siren views of the landscape makes me want to stay and cherish every miniscule detail of the beauty of this natural experience.

Eventually time and thirst drag me away and I continue my descend to a col between the twin Scardaun lakes. Here, with an ample supply of water, I brew up a cup of coffee and prepare lunch.

For this trip, I’m using a new integrated cooking stove, the Jetboil Micromo, which is lightweight and boils nearly a litre of water in less than two minutes. This has been one of those simple creature comforts that has increased my enjoyment of the outdoors tremendously by allowing me to boil a cup of my favourite brew quickly and without hassle.

After a hearty lunch, I climbed the majestic Nephin Beg, standing regally at 627 metres, and then descend towards the Bangor Trail, crossing the Bawnduff River.

As darkness approaches, I make camp on the shoulder of Glennamong mountain, close to a bog stream.

After retiring to my tent for a second night of clear skies, I leave my tent open and fall asleep under a clear dark sky, free from the artificial light of the modern world.

The International Dark-Sky Association recently granted Gold-tier status to Ballycroy National Park and the Wild Nephin Wilderness. An award in recognition to the region’s pristine skies.

The next morning, after a hearty breakfast, I climb to the summit of Glennamong, standing at a height of 628 metres, and then follow the ridge to the summit of Corr na Binne (714 metres). Curiously, my OSI map omits the name of this summit, referring to it simply as spot height 714.

From the distance, Corr na Binne looks prohibitively steep, but it is actually a gentle climb. The trek to this summit affords exceptional views of the twin lakes of Coire Da Loch and the ridge curving to Bengorm.

From the summit of Corr na Binne, the ridge splits into two southerly directions — a south-west ridge in the direction of Mulranny and a south-east ridge towards Bengorm.

The beauty of this scene is tempered by the realization that my trip is finally coming to an end. I consider spending another day in the mountains by taking the south-west ridge and then backtracking to finish on the  Bengorm ridge. But I am now almost out of food and I wanted this trek to be a completely linear walk, so I head south-east along the Bengorm ridge until I eventually reach the summit of Bengorm (582 metres).

From Bengorm, I descend the south spur to meet the Great Western Greenway – a dedicated road for cycling and walking.

It is about a seven kilometre walk along the Greenway back into Newport. I was initially a bit apprehensive about this long walk on a tarmac surface after my days in the wild, but it turned out to be a fine transition from the wild to the civilised.

The horizontal surface is a welcome relief to knees, tired from three days of ups and downs.

Over those days, I have covered a total of 44 km  with 2,200 metres of climbing, encumbered by a 14 kilogram backpack.

Walking along the Greenway I meet the first members of my own species again. Firstly some cyclists and then other ambulators going in the opposite direction.

By international standards, we may not have the highest mountains or the largest wilderness, but what we have are true treasures.

We are surrounded by the second largest ocean; we have one of Europe’s oldest mountain ranges dating from 400 million years, along with younger glaciated ones; our blanket bogs formed at the end of the last glaciation, 10,000 years ago, are the most important in Europe; our temperate climate allows us to spend time in the mountains at any time of year; and of course our famous hospitality and craic at the end of every Irish adventure is nowhere else to be found.

After three days in the Wild Nephin Wilderness, I can now answer in the affirmative to my opening question “Is it possible to find an area of true wilderness in Ireland?”.